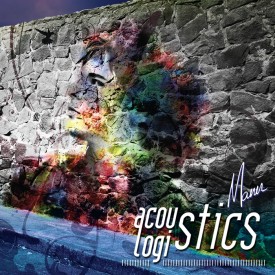 Following up the success of his debut album, Mann returned to the studio for a second effort in which he intended to settle down and show his growth as an artist. With less-pop tunes and more acoustic elements, Mann delivered eight tracks with unique voices and meaningful lyrics of a man finding his way in life. Acoustics Logistics also introduced collaborations by Hector Adrian as a producer by the side of Nurivan Reyes. The first single of the record Sol was also the first Spanish single of the artist. The song debuted in the Independent charts peaking at #11. The musicality and melancholy of Mann’s voice got him the best reviews for a single. The music video was released as well later in 2009. Simultaneously, Mann released as a promo single for North America, the radio-friendly song Undead.

The opening song Clouds shows the heavy use of pianos in Mann’s record. The maturity continues with the acoustic oriented Herejia. Mann also released his first featuring performance with Nurivan, Coloreando, which became one of the crowds favourite.

Mann’s tour called Acoustically Logistic Tour started in 2009 and continued all the way until 2010. Mann featured on the show a real banjo and made history for a polemic dance with the tambourine in Some Days.

Mann released exclusively in CBC Radio Canada a single Some Days, which was set to commemorate road trips in Canada. No music video was produced for this single, although due its popularity it was also released in Mexico, peaking at #89 in Independent charts.

In 2010 Mann announced the release of a third single Olvidado, which got a great buzz and peaked at #7 in Independent charts after only one week since the release. Then a week after he became Mann’s first #1 single. The music video got a heavy rotation and Mann appeared in several newspapers and internet media due the success of the single. Mann sales increased as well considerably, closing successfully the album promotion.